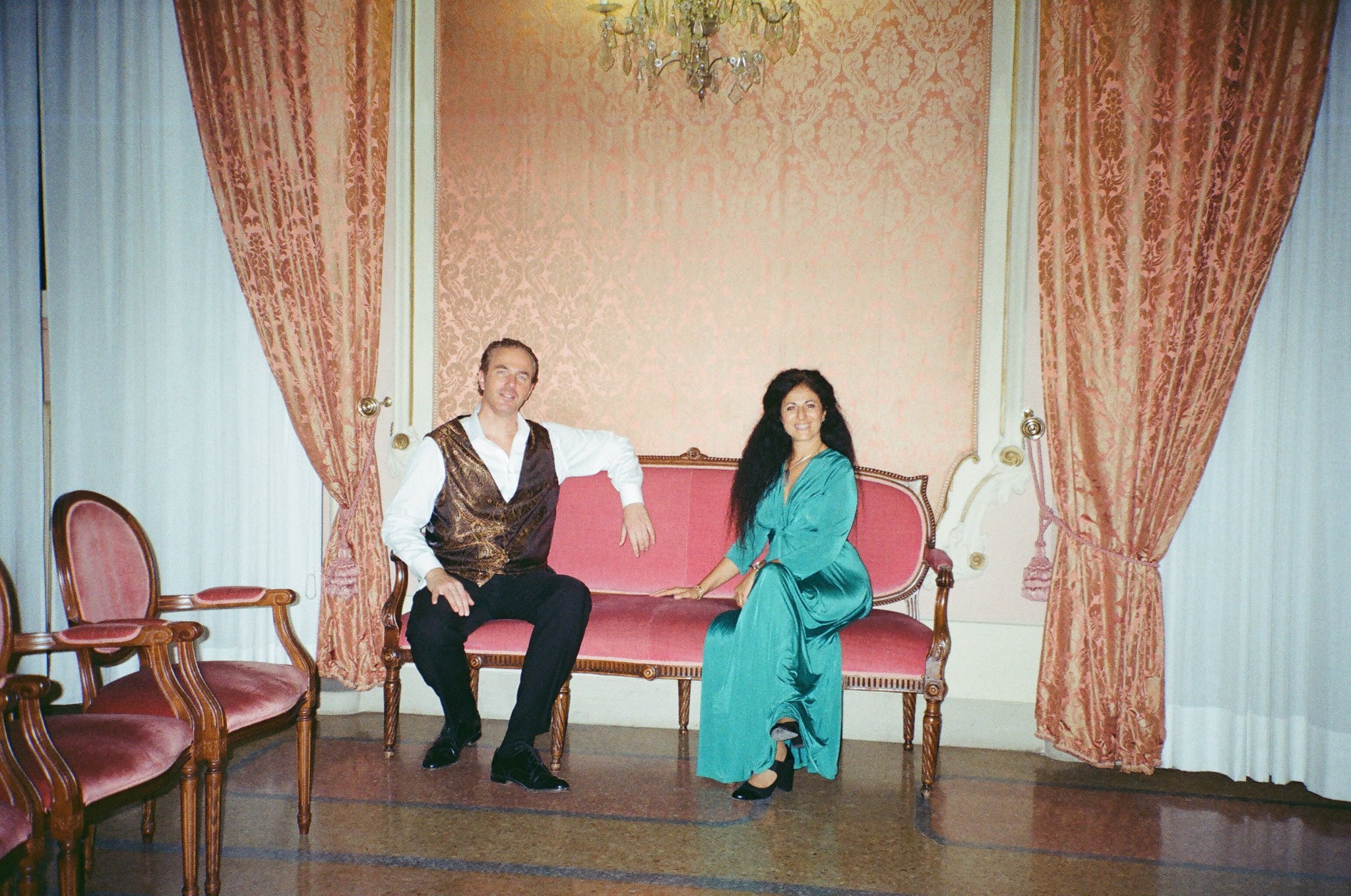 The Duo “Musica del Cuore” was established in 2012.Since then Antonella Orefice and Neville Jason Fahy have performed on numerous occasions in Greece (Megaron Mousikis & Athenaeum concert halls in Athens, Municipality of Saronikos concert hall, Chlemoutsi castle of Andravida/Kyllini, 'Tataneio' in Amaliada, 'Saint Antonio' Hall of Tinos, etc.) and Italy (Teatro del Settecento', 'Circolo Lirico' and 'Circolo Ufficiale' of Bologna, Villa Smeralda of San Marino in Bentivoglio, Villa Serena of San Lazzaro, Cento, etc ). The have collaborated during various concerts with distinguished artists such as the mezzosoprano Monica Minarelli the tenor Christos Delizonas, the composer George Voukanos, actress Daisy Sempekopoulou and visual artist Stella Evgena. On the 16th of September 2017, 'Musica del Cuore' paid tribute to Maria Callas with a concert at the Megaron Mousikis of Athens in commemoration of the forty years since she passed away. This homage has been presented in Greece (Numismatic Museum of Athens, Municipality of Lamia, 'Lithografio' theatre of Patras) Switzerland (Salle Paderewsky, Casino de Montbenon in Lausanne) and Italy (Centro F.Malpensa di San Lazzaro & Teatro G.Verdi di Buscoldo, Ridotto del Teatro Comunale di Ferrara).

Born in Bologna, Antonella Orefice started piano lessons at the age of fifteen with M. Crema at the Conservatory of Bologna. Whilst studying at the University of Bologna DAMS,she attended intensive courses 'Canto Lirico' with the soprano Giovanna Giovannini at the conservatory of Bologna. Her passion led her to create an ensemble with the violinist maestro Fabio Brunelli. She has collaborated with the choirs "Euridice" and "Novarcanto" directed by P.Scattolin, and G. Giovannini respectively. She has sang in various Italian theaters (Parma,Reggio Emilia,Bologna,Ancona). After moving to Athens she has collaborated in a variety of concerts with the pianists Neville Jason Fahy, Manolis Papasifakis, Regina Beletskaia,cellist Susan Norton, composers George Kouvaras and George Voukanos. She has sung in various venues in Italy and Greece(Teatro di Parma,Teatro di Reggia Emiglia Megaron Mousikis of Athens,B&M Theocharaki Foundation, Athenaeum Conservatory,Ancient Theatre of Ilida etc.) and has collaborated with the youth orchestra of Bobblingen and Hellenic Radio Television Choir. Antonella is also a member of the "Amberlink Ensemble". She has participated in seminars with William Matteuzzi and Michael Chance. In 2010, she was awarded the first prize at the European Music Contest "Citta di Sirolo". Since 2016 she has collaborated with the mezzosoprano Monica Minarelli in a variety of concerts. Of special interest is the recital they did at the Teatro "U.Giordano" di Foggia with the famous pianist L.Maggiera. In October 2016 she sung the role of Michaela in "Carmen" (Bizet) in a production of M.Minarelli at the "Circolo Lirico" di Bologna with the pianist Ricci. Greek-British pianist Neville Jason Fahy has studied piano in Athens at the “Ethniko Odeio” with Rita Vourtsi, the “Odeio Mousikis Etairias Athinon” with Nillian Perez – Ioannidou, in London at Trinity College with Anthony Peebles, and at the University of Indianapolis (Athens Campus) with Dr.Alla Halapsis and George Manesis. He has an MA in Music , is a Fellow of the Royal Schools of Music, and holder of the Greek Soloist Diploma.He has also taken part in a variety of seminars with Vasary, Ardakov, Ganev, Hatziniko, Halapsi, Manesi & Toufexi. During his studies in London he took part in several competitions in England gaining first prize at the "Richmond upon Thames - Music Festival" , second prize at the "Hastings Musical Festival" and third prize at "Kingston upon Thames Festival of the Performing Arts". He has appeared in numerous concerts and festivals in Greece and abroad in solo repertoire as well as chamber music. He has performed with the “Melody Chamber Orchestra” ,”Bios Chamber Orchestra” of Athens, “UIndy Chamber Orchestra” of Athens, “Youth Orchestra of Bobblingen”, “Orchestra of Kifissia” and the instrumental ensemble “Cantabile” of Kifissia.
As of 2012 he has collaborated with the composer George Voukanos (Megaron Mousikis of Athens, National Archeological Museum of Athens, Ionic Center, the 1st and 10th Festival of Andravida-Kyllini and the 25th International Festival of Ancient Ilida etc) He is pianist and founding member of the “Duo Sopiano” (with Elli Anastasopoulou) , “Trio Lirico” (with Elli Anastasopoulou and Vassili Asimakopoulo) and “Musica del cuore” (with Antonella Orefice) ensembles. As a pinnacle of the performances with Antonella Orefice and Monica Minarelli, in 2017 he organized a series of concerts dedicated to his iconic muse Maria Callas in Greece, Italy and Switzerland. He has composed, published and recorded three compositions for solo piano and one for piano and cello.(Music Creation Series,”Edition Orpheus Music House”,Nikolaidis,www.music-house.gr) He teaches piano, theory, and Greek dancing at Campion School Athens and has also taught piano at the Scuola di Musica ‘J.du Pre’ (‘Fondazione Mariele Ventre ‘ Bologna) and St.Catherine’s British Embassy School Athens. Neville Jason Fahy is Vice President (for foreign affairs) of the Associazione Mozart Italia sede di Bologna.